I’ve been pulling bigger miles and feeling great. One has plenty of time to listen to their body and analyze the balancing act of motion and energy usage for more efficient hiking.

As Forest Fire and I exited through the Pisgah National Forest we entered the Cherokee, in time for more rain. Forest’s gear got soaked and he decided to jump trail to a hostel for a day to dry out. I kept going, unaware of what I was about to get myself into…

As the daily afternoon storm rolled in, we met again at a shelter around 2pm. We were the only ones at Jerry’s Cabin Shelter (trail mile 301) and just dodged the storm. We decided to sleep until 9pm and night hike 15 miles. After a hot tuna and Knorr noodle dinner we set out about 10pm.

Little Bear is a personal trainer and checks in at 6’8″. We used my bluetooth speaker for about 6 hours of the night to play comedy routines I had downloaded previously on Pandora. It helped pass the hours and ward off any bears down trail, though I’m fairly sure we had one sighting later that night. Damn things can crash through stuff loud or be amazingly stealthy and quite.

As we made our way to daylight, Little Bear led through the night and cleared out enough cobwebs to make a set of silk sheets. He also has a bit of a knee problem and has developed a very sensible controlled pace. I have had neither.

Being forced to slow down and pay attention to my body and muscle burn out was invaluable for my long game. Basically I’ve attempted to treat my body like it’s a Porsche with only fifth gear for five weeks now. After 10 hours behind Little Bear, I made a number of adjustments, mostly to my uphill strategies and it really payed off. My mind tends to wander fully into something else and my body shifts into full push to burn out before I know it. Temperance is not a strong suit for me.

Around 8am we made it to Hogback Ridge Shelter (trail mile 317) and woke up Slippy and Mouse Trap. Little Bear laid down for a power nap, I took some time to eat, caffeinate and dry out my feet.

Each time I stopped, I re-evaluated my plan. It started out as a night hike until morning, but when the rains seemed to hold off I decided to just keep going. I had no idea I would enter Forest Gump mode over the next few hours.

Big Bald was the big climb of the day. The rain was now moved from 11am to 3pm. Just enough time to get up and hopefully over the next summit. A somewhat risky move as it’s a bald and lightening has accompanied the afternoon storms at times.

With a slightly modified, but still balls to wall downhill game, I passed Slippy and Mouse and ended up on the summit first. I had lunch and lots of caffeine and enjoyed the view. 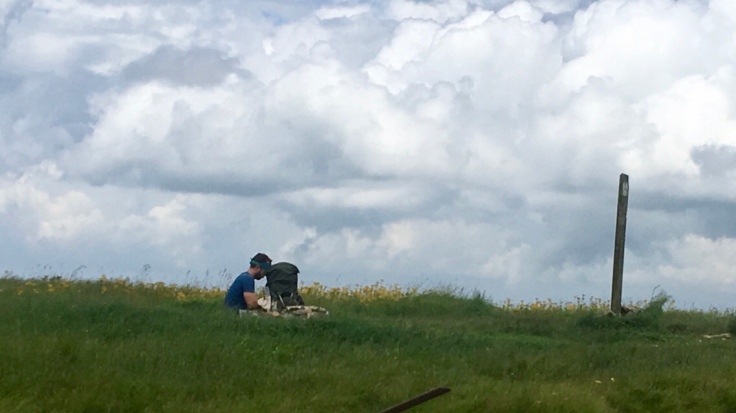 All three caught up to me. I was really elated to see Little Bear continue. I think he was a little dismayed by my new re-evaluation to keep going, yet again. It’s now 24 hours or bust, I’m already in the deep end of the pool…

Slippy and Mouse (“the kids,” as I’ve been titled “trail dad” lol) went to the next shelter. I kept pounding out the miles feeling my first “runners high” in almost twenty years. Damn it felt good.

Before I knew it, darkness was descending again. The air so humid and sweat was so thorough, I couldn’t dry out my fingers and phone to get past the unlock screen. Oh well, I don’t need it. I know which way I’m going and want to preserve the remaining power on my phone to track mileage. 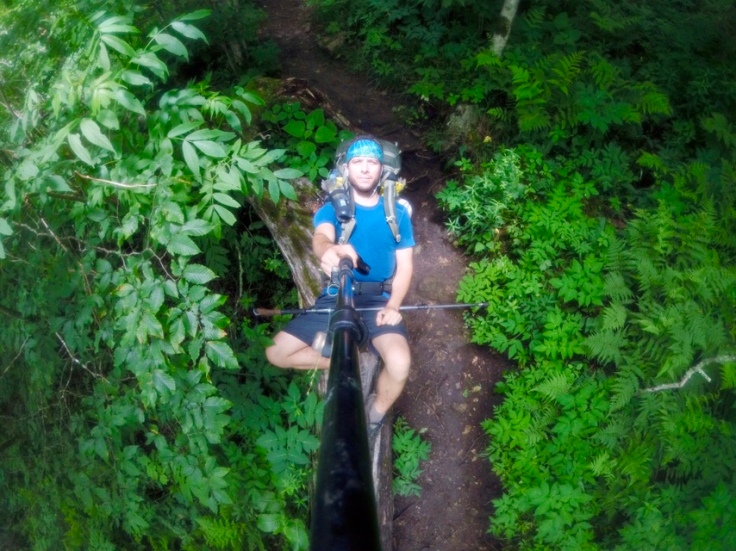 Finding my new stride and adding a couple new pole movements, I felt like a machine, there was no stopping me. I was flying by water sources, views and good seating areas I would normally of hit.

Around 10pm my headlamp was just about dead, my backup battery was depleted and my phone had 3% left. This all occurs right at the same time a small bear is startled by my sudden stopping and runs up a tree. I grab the spray and push through singing Willy Nelson’s Midnight Rider, a perfectly fitting song for the moment. I wonder just how many bears are above me and stay quite as I roll by?

When I felt clear of that situation I remembered Slippy had given me another headlamp to give to Forest Fire that morning, it saved my ass as I traversed the last few miles of switchbacks down to Erwin and Uncle Johnny’s Hostel. I had not seen a single person since the bald, 18 miles back.

I encountered another bear, this time jumping down the tree and crashing through the brush. I’m fairly freaked out at this point with exhaustion; starving and thirsty, with multitudes of spiders, salamanders and shadows that make a delirious mind scream “snake!” I had my first full face plant crash. It happened to occur when I was recording.

(edit: the summit was “Big Bald,” “Big Butt” was the summit before it.)

Those last few miles were really tough, more on the mind than the body. When I finally got to the bottom by the Nolichucky River, I arrived at my goal, Uncle Johnny’s Hostel in Erwin, TN. A full 44 miles in length, over 6,200 feet in elevation climbing and well over 90,000 steps with a nearly empty 35lb pack.

I just found that you can see your distance by hour with the iPhone’s native health app.

At the end I was gifted the best trail magic to date, a full box of Italian leftovers from a local guy named Rex. As I laid there on the lawn at Uncle Jonnny’s, at exactly 11pm, I seriously almost cried over this meal. 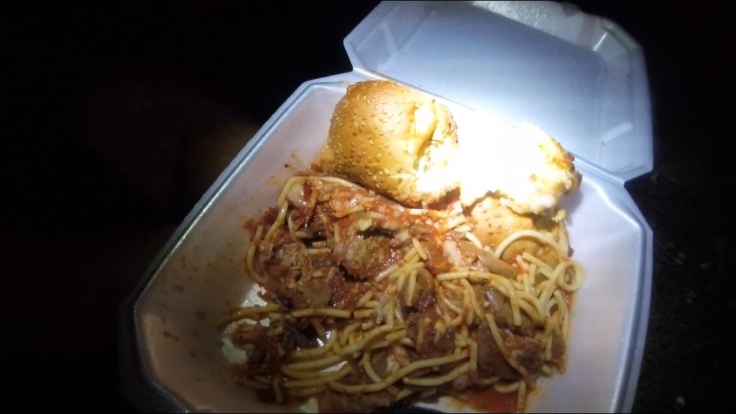